Pirate Teachers are HERE! Are you?

Pirate Teachers are HERE! Are you?

We Need More Pirates! Pirates help increase student’s engagement, boost creativity and transform your teaching! Scroll to the bottom of this article to review the first two articles in this series.

Pirates need to be immersed in what it is they are doing. What does that mean exactly? Immersion simply means being present, being in the moment, being one with whatever is going on at the moment.

This guy is totally immersed!

Yay! OK, (check) that’s me, I’m present in my classroom every day even when I’m sick, I’m present and accounted for.

Great! (Well, not so great if you’re spreading your sick germs to all the kids) but being present means, mentally present. Physical presence means nothing if you are mentally on a journey through the seven seas and have no idea what the child in front of you is saying or doing.

Is this where you’d rather be?

I once completed a 3 day leadership conference on this very topic.Trust me, not an easy task to stay focused and checked into the present for long periods of time especially with a brain that checks out after about 2 seconds.

At the end of the first day, I was (almost) the first one out the door and just wanted to get to my room to veg out. I had a migraine from trying to focus intently on the present. It’s no piece of cake and it’s probably the hardest part of teaching.

For me, it’s the hardest part of life. My brain goes a million miles an hour in a million different directions all at once. In order to concentrate on one thing, means I have to block everything out and focus… REALLY focus on that one task and get it done as quickly as possible or the moment is gone.

What are the reasons you aren’t present in the moment during classes?

I have too much to do…

Yes, yes you do. That’s why God created helpers. No matter how much you want to control and do everything yourself, you can’t. There’s a time to control and a time to let go and let the moment control you. Kids know if you are really listening to them. They can tell if you are paying attention to them or if you have checked out and ran off to never never land.

The thing about being in the moment is that you see so much more of what your students are doing, you see their progress or you see their struggles more clearly. Struggling students need our attention. They need to know that they will not sink. They need us to be their lifeguard and catch them when they start going under. Who do you want teaching you to swim, the guy sitting up above the pool or the person in the pool with you, beside you, ready to catch you when you start to struggle?

“When delivering first instruction, especially to struggling learners, you need to leave the comfort of the lounge chair or lifeguard tower and jump into the water with your students.”

There’s a time and a place for teacher led teaching and student led learning. If you aren’t present, you won’t catch the cues of the needs of your students. You’ll miss those teachable moments. Teachable moments aren’t planned by the teacher. They aren’t planned at all. The teacher has to be completely aware of the moment in order to catch that moment and use it. Sometimes, that moment is lost forever and it might be a game changer for that particular student.

How do I start?

This all depends on you and your teaching methods. Immersion takes practice. For me, I don’t teach from a desk or a chair. It’s very hard for me to sit still, so that’s where I started. Instead of trying to grade papers or fix centers, I would go from center to center or table to table or desk to desk and just see what the kids were doing.

Next, I had to interact with them and play with them. This was hard because I would play while I was looking around at other kids to see what they were doing. Or I was picking up their center items and rearranging them on the shelves. I wasn’t fully immersed in their world. I had to learn to ask them what they were drawing or building or playing, rather then showing them the“right” way to do it. I had to learn to leave the mess on the floor and allow them to learn to clean it before changing centers. I had to learn that purple elephants were ok and coloring outside the lines wasn’t detrimental to anyone’s health.

The kids notice the difference, even if you don’t.

I love the story Dave tells about one time that he had a sub for a few days while he was gone. He planned a movie. Usual activity for sub work within many rooms on sub days, but Dave’s room is different. Even during movies, he is immersed in their learning. He didn’t realize this until he returned and the students complained that he wasn’t there for the movie. His response was that they would have watched It even if he would have been there, but then they explained to him that their complaint wasn’t with the movie, but with the sub. “What do you mean?” Dave said. One student replied, “Yeah, but you always pause the video to tell us cool things and build up anticipation for what’s coming. You make little comments the whole time. We like that you watch and react to the video with us. It’s just different when you’re here.”

After I read that, I observed my classes when I used videos and did an experiment. My most talkative classes became less talkative during the video if I stopped and discussed things. They also had more to say after the video when we would have a discussion and they made more connections to other things they were suppose to be learning about. They would also ask questions during the videos to have me stop to explain things when they didn’t understand.

After watching, you could even has some students re-tell what they watched!

But they’ll never pass the test!

Which test? The test of life or the test to see if they can answerABC or D correctly? Choosing the right answer on the test is either common sense or critical thinking. “Drill and Kill” keeps it in short term memory, but does nothing for long time learning. I can’t say it any clearer than Dave did and when I read this, I printed it and hung it up for everyone to see.

“At some point in your career you have to decide if you care more about teaching to tests or teaching kids. My decision was made a long time ago.

Well folks, it’s way past my bedtime and my brain is drained. The furbabies are already asleep and I’m going to close for now and enjoy the peace for a bit before heading to sleepy town myself.

I’m just a simple country girl who wanted to make a difference in children’s lives by becoming the best teacher/model I could. I want to promote teachers to be more than just a person in a room. I want to help them to love and guide all children to become the best person they can be. I truly believe all children deserve a chance, but those who are less likely to achieve greatness, need the most, loving, kindest teacher they can possibly have because they probably do not get this from anywhere else. We have the ability to shape and guide these children and lead on to greatness and life they deserve.

Want to know more? Add Christy’s WeChat to get to know more about her and all the great things she does with education. WECHATID: AuntieChristy

Scan this QR code to leave a reward!

Other Articles by Christy:

Teach Like a Pirate:  How to be a Pirate!

Do you want to be a teacher or a pirate?

The Struggle is Real (Modeling Behavior)

How to create YOUR perfect classroom

Getting your students involved in the classroom, Pirate-Style! 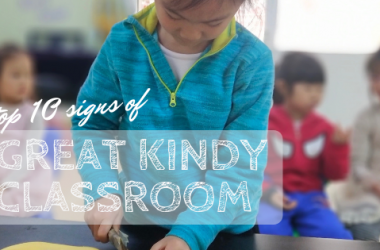 10 Signs of a Great Kindergarten Classroom