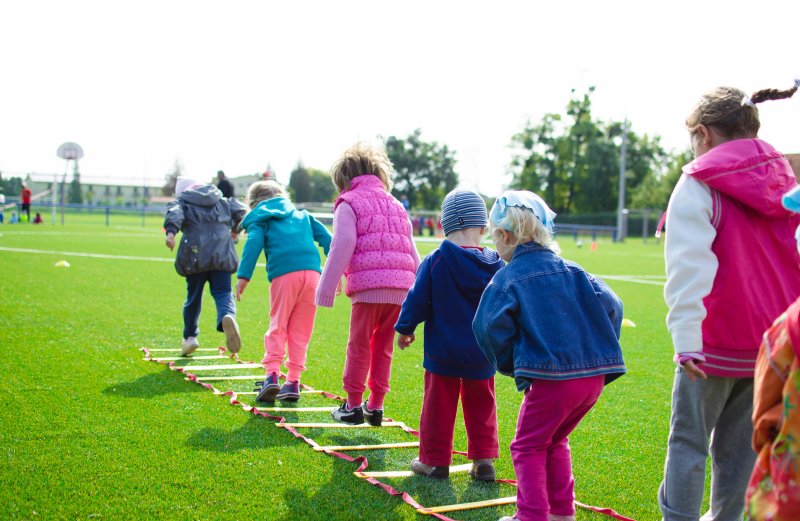 Physical activity throughout the school day is necessary for children to reenergize themselves and to be able to maintain focus on their school work. Being involved in movement positively affects children both cognitively and physically. Movement activities can be initiated by teachers throughout the day and especially during classroom transitions. Using songs and rhymes that reinforce lessons improve children’s listening and memory skills. Activities, games, seat-changes, role plays, and dance actively contribute to children developing basic timing, balance, coordination and concentration. Educators have noted fewer behavior problems when children are provided with many opportunities to move.

When initiating an activity or game, explain the rules and demonstrate when necessary. Thoughts to consider:

1. When children seem restless, have them stand and do exercises. Ask them to stretch slowly, do arm circles, sway, touch toes, hop, bend, jump, jog, etc.

2. Have students march in place as they count by 2, 5, or 10, recite the ABC’s, say the multiplication tables, etc.

3. Have a contest between the girls and boys. Ask the children to follow you as you run in place. When you stop, see which group of children stops first (boys or girls) and name them. Then begin to run again, stop running and comment on which group was the first to stop.

4. Have the students do two things at once. Examples: tap their heads and rub their stomachs, clap their hands and stand on one foot, snap their fingers and nod their heads, do jumping jacks, etc.

5. Have them do crossover exercises such as: touch their left elbow to the right knee and then do the reverse. Or, have your students hold their arms out in front, cross arms at the wrist area, turn their palms down and in toward each other, clasp fingers together, pull clasped hands under and up through their arms in front of their chest and reverse the action. For another exercise, ask them to put their right index finger and thumb on their nose, and touch their right ear with their left index finger and thumb. Say, “When I say ‘change!’ reverse the position of your hands.” Each of these may be done several times.

7. Have the students stand by their chairs or in a circle. Have each of them turn sideways with their right hand on their right hip. Ask them to write words or numbers in the air using their right elbow. You could say, “Write (or print) your name,” “Write the name of your favorite food,” “Write your address,” etc. Then have them turn and put their left elbow on their left hip and continue the activity. Ask the students for ideas of what to write or have different students lead the activity.

9. Have the children choose a partner. Have one student slowly print a current spelling word on his/her partner’s back. The partner guesses which word was printed. Have them take turns doing this.

10. Ask the children to stand up. Explain that when you say, “I spy,” every child needs to stop what he/she is doing, listen, and respond with, “What do you spy?” Say something like, “I spy children dancing in one place,” or “I spy a rock star silently playing a guitar.” The students act out that idea until you say, “I spy.” Then all the students stop what they are doing and respond with, “What do you spy?” The game continues with you suggesting other ideas such as, “I spy children waving their arms.” After playing awhile, say “I spy students sitting down quietly.” Students may be chosen to lead the activity.

11. Have the children sit or stand in a circle. One student, –“It” — stands in the middle of the circle and covers his/her eyes while you choose a leader who stays in his/her place. Once the leader is selected, “It” can open his or her eyes. Then the leader starts the game by nodding his head, reaching his arms up, or making circles with his hands and everyone follows his lead. Caution the children not to look directly at the leader or to indicate who the leader is when “it” uncovers his/her eyes. The child who is “It” turns slowly around, trying to figure out who the leader is. The leader should try to change actions when “It” is not looking at him. “It” gets three guesses. If “It” does not guess correctly, the leader becomes the new “It.” If he guesses correctly, choose two other children to be the leader and “It.”

12. Play “Simon Says.” Stand at the front of the class and give commands. Carry out all of the commands, but tell the children to obey only the ones preceded by “Simon says.” For example, if you say, “Simon says: hands on your hips,” everyone does it. But if you say, “Run in place,” no one but you should be running. A variation is to say “Do this” or “Do that.” “Do this” means that the children should move like you are moving, while “Do that” means for them to stand motionless. Those who do not listen and move at the wrong time must sit down and wait two turns before playing again.

Have the children touch the body part as it is named. You can substitute names of different body parts for the third line, such as, “neck and hips and knees and cheeks.” Start off slowly and increase speed as you sing it over and over.

14. Locate lyrics and music to many singing games such as “Hokey Pokey, “The Farmer in the Dell,” and “A-tisket, A-tasket” at http://www.niehs.nih.gov/kids/music.htm (National Institute of Environmental Health Sciences).

16. Have the children name various ways they can move their hands, feet, arms and bodies, such as: stomp or tap their feet; snap, pat, or clap their hands; move their arms up, down, out straight, or around; as well as move their bodies by bending, stretching, jumping, etc. Divide the students into small groups and have them make up a pattern to do over and over such as: two claps and three stamps; snap, tap, clap – snap, tap, clap. Or, they could use arm and hand motions such as arms up, hands on hips, arms up and arms down at sides. Have them perform their arrangement for the other children who then join in and follow their lead. Have the students start very slowly and gradually increase their speed as they continue to lead their pattern. A variation is to have them make up a chant to go with their movements. For example, “Bend to the left, bend to the right, clap your hands with all your might.”

17. When children have to wait patiently in line, lead them in a silent “follow the leader” activity to five counts, two slow and three fast. Begin by clapping the beat to get their attention. Other motions to the five beats could be a combination of some of the following: tap shoulders, snap fingers, pat legs, raise hands, tap fingers together, turn hands around, pat head, nod head, tap toes, rub stomach, pat knees. The students must follow the leader in silence. You may want to choose a child to be the leader (see, “25 Ways to Obtain Children’s Attention in a School Setting”). A variation is to do this in the classroom with a child in front leading the class in several silent moves and then the student chooses another child to take his/her place.

18. Play “Heads Up/Seven Up” by choosing seven children to come to the front of the room. The other students put their heads down on their desk with one thumb up. The seven chosen children pick one student each by touching a child’s thumb. After a child is chosen, he/she hides his thumb. After the seven players have each touched a child’s thumb, they return to the front of the room. Then say, “Heads up, seven up,” and children sit up. The chosen children stand up and take turns guessing who touched them. If they guess correctly, they get to replace the one who tapped them. If they miss, they wait until everyone has guessed and then they are told who picked them and the game begins again. If a child peeks, he/she is out of the game. A variation is to ask each chosen child a question like a math fact, a spelling word, or any information they should have memorized. If the child answers correctly, he may replace the one who tapped him.

19. Play “Four Corners.” Number each corner of the room. One child is “It.” He/she closes his eyes and counts aloud from ten to zero. Meanwhile, each student tiptoes silently to any one of the four corners of the room. Everyone must be in a corner by the time “It” says, “zero” and then calls out a number of a corner. Children in that corner are out and return to their seats. The other children redistribute themselves and “It’ counts again. Play continues until one child is left and he/she becomes the new “It.”

20. Have the children present a talent show for their class. Their act must be suitable to be performed at school and completed within a given time period. Provide the children with an opportunity to plan their performance. It can be done as a solo, pair, or as a trio. Encourage the students to clap after each presentation.

Used by permission of the author, Leah Davies, and selected from the Kelly Bear website [www.kellybear.com], 11/06. 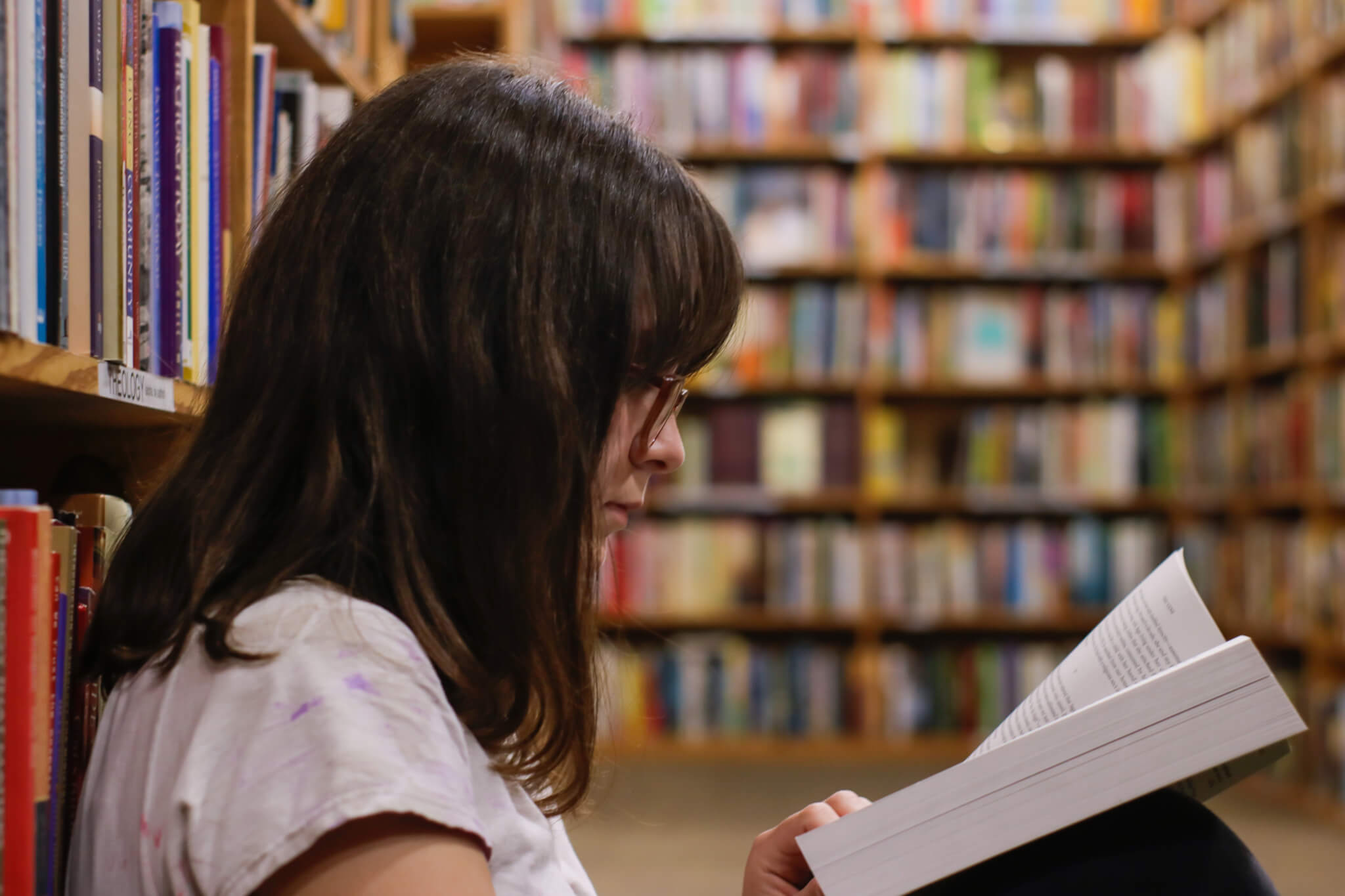 100+ Classroom Activities Before & After Reading

Are you students BORED to tears when reading? [Teaching Tips] 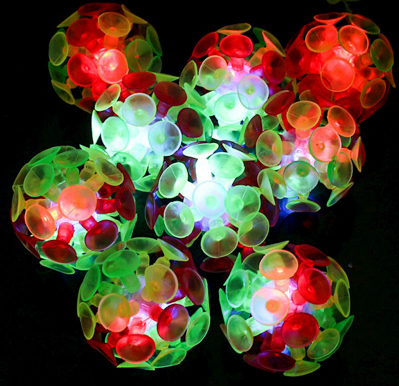 THIS TOY MIGHT BE KILLING YOUR CLASSES! Do you use it?

Podcast | 5 Things to Keep in Mind when Implementing Technology