The first 100 Chinese Character book emphases basic Chinese character learning. 象形字xiànɡxínɡzì, the hieroglyph characters, are pictographic. The characters are also indicative of single components (独体字dútǐzì), which makes them fun and easy to learn.

Chinese is a character-based language. Chinese characters express meaning and sometimes pronunciation. Each character has its own story and image. They contain thousands of years of Chinese wisdom, culture and philosophy.

The first 100 Chinese Character book emphases basic Chinese character learning. 象形字xiànɡxínɡzì, the hieroglyph characters, are pictographic. The characters are also indicative of single components (独体字dútǐzì), which makes them fun and easy to learn. The ancient Chinese used abstract symbols to indicate meaning. The second reason I arranged this way is that 80-85% complex characters which were developed later on are combinations of 独体字dútǐzì, and most of these characters have one part often indicate the meaning which known as ‘radicals’. The another component(s) often expresses where pronunciation comes from. You will find more of these characters in the second 100 Chinese Characters book.

Another important aspect of this book is that I introduce several basic radicals, and give common characters that have each radical right after as an exercise and extension. Hopefully, this way it will help learners relate from character to character. For example “口” kǒu, mouth, to “吗” ma question modal particle and “叫” jiàoto call, to be called.

Each character has its pinyin on the top and the English meaning at the bottom. Often time one character might have several English meanings, so we recommend learners apply them under contexts. The exercise would be to expand one character to a 2-character-word, then into a short phrase, and eventually try it out in sentences. The red part in each character indicates the radical. The grey boxes are for learners to trace the character 7 times before they start to write their own. Tracing and imitating is helpful for learners to have better form. There are enough empty boxes to practice writing. We would suggest learners apply the character in sentences. Making sentences with new words is efficient for learning. 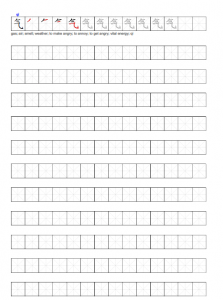 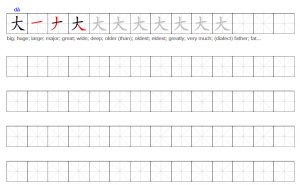 If you have any suggestion and feedback feel free to contact us at Wechat: jamiesmandarin

Only logged in customers who have purchased this product may leave a review.